It’s a bit of a hot take to come out and say that movie theaters are in decline following a two-year run headlined by back-to-back Avengers films grossing nearly $5bn worldwide.

But that’s exactly where we’re going to start here. In 2017, the theater industry recorded its lowest number of theater tickets sold since 1995 and while there was some rebound in 2018, sales again fell in 2019 and will be much lower this year thanks to the pandemic. 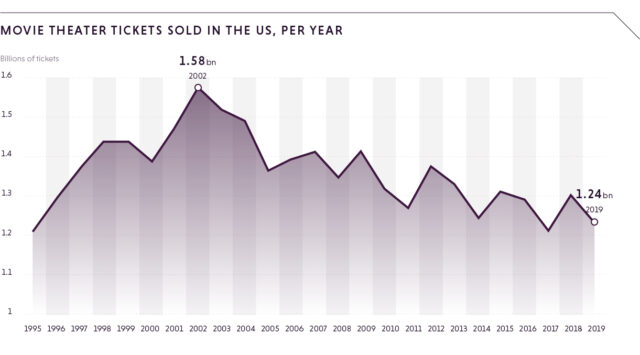 But these changes (and the chart above) only look at overall ticket sales. If you’re looking at ticket sales per capita, the trends look much, much worse. The increase in average ticket prices and add-ons like 3D have put in a ton of work to hide the fact that fewer and fewer people are going to movie theatres. In 2002, theaters were selling 5.5 tickets per person, by 2019, that number dropped to 3.8.

Unlike in the US, cinema ticket sales in Europe have seen some gains over the past decade, with some ups and downs, most notably in 2018. Though in a similar fashion, looking at these sales on a per capita basis shows that tickets per person have gone down or, at best remained flat – going from 1.95 tickets per person in 2009 to 1.86 in 2018. 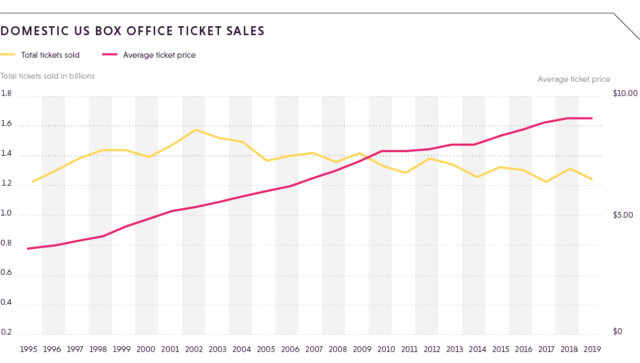 Also note that this is the average ticket price – in many places in the United States, a $9.00 movie ticket is an absolute steal.

Industry experts have pointed to several potential causes for these declines, including the availability of the home theater and larger TVs, increased availability of streaming services and movies available on-demand, and the release of blu-ray and other high-definition formats.

TROLLS: WORLD TOUR AND WHAT IT MEANS FOR THE FUTURE OF MOVIE RELEASES

With theaters closed across the world and no good options for postponement, Universal decided it would release Trolls: World Tour, the sequel to its hit animated film Trolls, on streaming platforms on April 10th. It took a few weeks for receipts to come in, but the results speak for themselves. Through its first three weeks, Trolls: World Tour generated more than $100M in streaming revenue for Universal, making it a bona fide success story. Sure, the weekend was light on releases and yes, it was one of the few family-friendly releases on the schedule but those numbers are serious business.

In the wake of that success, Universal announced its intention to do more streaming releases in the future, even after the pandemic conditions have softened to the point that moviegoers can return to theaters. But theater groups were not amused, and almost immediately AMC (Theater Group) CEO Adam Aron immediately fired back an impassioned message, saying that if Universal went ahead with this plan to release more movies as Premium Streaming options (PVOD), they would stop showing all Universal films in theaters. Regal Cinemas parent company Cineworld made the same decision shortly after.

In terms of industry feuds, this is as spicy as they come, and smart money says that this isn’t a fight that AMC can win – after all, AMC has already given the game away by suggesting that the only reason people watch movies at their theaters is because they have no other options. On the other hand, Universal may not be eager to test the waters with big releases for the James Bond and Fast & Furious franchises coming up, and have already done some backpedaling/damage control in public.

For movie studios, the economics of PVOD are in their favor – while ticket grosses from theaters are split between the studio and theaters, the studio retains close to 80% of streaming revenue. So is this a temporary spat, destined to be forgotten, or the start of a massive acceleratory process that will change how movies are released (and watched) forever?

This week, we’re digging into the data to find out.

Priced at $20 in the US and £15 in the UK, Trolls: World Tour was well-positioned to take advantage of consumers’ changing habits shifting toward digital media. Not only was it a more convenient option for the movie-going audience during the lockdown but was also a considerably cheaper one, leading to more than 5 million sales/downloads over opening weekend. 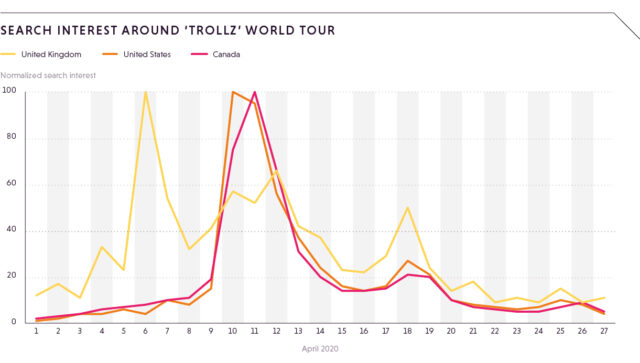 British consumers showed the most overall excitement for the movie, with an earlier spike in pre-release search queries and considerably higher interest through the week despite the movie’s release on a Monday. Search interest peaked during release week and tailed off immediately afterwards. Most searches focused on how and where to stream the film, as well as pricing information.

In the US, people between the ages of 25 and 34 were the most likely to stream the movie – 1.7x the average – particularly if they had a child under the age of eight in the household. In the UK and Canada interest was surprisingly higher among people aged 18 to 24. This interest translated to an 8% increase in page loads on entertainment and movie review sites in the US on the day of Trolls: World Tour’s release, and a 9% increase in the UK, with the majority of this new traffic coming from PCs (though mobile was the preferred platform in Canada).

In addition to generating search interest, the release generated plenty of buzz. Despite mixed reviews among critics, viewers were mostly positive on the film, with 41% of tweets/posts/social interactions about the movie generating positive sentiment during release week, relatively unchanged from pre-release sentiment.

In the wake of the news about the movie’s success and the spat between Universal and AMC, discussion about that conflict has also become a trending topic, registering more total interactions than the movie itself. Supporters of the digital release model primarily cite pricing and availability as key positives while detractors worry about the future of theaters, the economic impact, and potential unemployment challenges.

With the impact of coronavirus extending well past the current planned open dates for many countries and regions, and studios pushing movie releases back to late in 2020 or early 2021, it does not appear that movie theaters will be in a position to recover any time soon. And it will likely be the case that once these measures are no longer needed consumers, eager to return to former habits and do the things they have been denied for months, will flock back to theaters. But it’s also likely that doing so will remind them of the ease and convenience of watching release movies at home.

For studios, the economics might work out either way, and it’s certainly easier to see movie releases as less of a “zero-sum game” when consumers feel they can more easily watch a new release movie on a weeknight, without having to worry about securing seats for a popular new film. One of the key advantages of a digital release schedule is likely to be a reduced reliance on Friday nights and weekends for releases.

We’ve frequently remarked on the upswing in the amount of TV and video content people are watching during the day and on weekdays. One thing to note is that this effect varies based on the type of content – movies are the biggest beneficiaries of this, particularly those viewed on OTT devices. Kids’ content is also a big winner here so it’s no shock that where the two overlap, entertainment companies are going to see the best results. 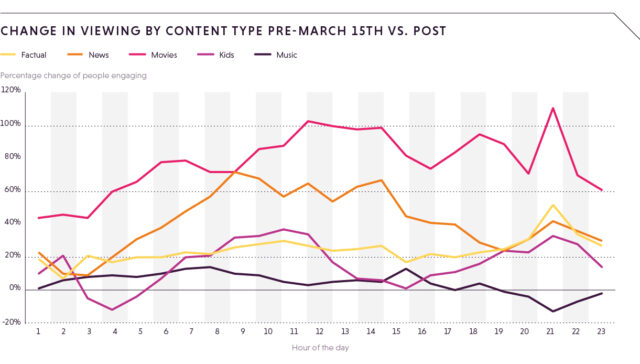 Family and kids’ entertainment brands, take note: Monday from 11am to 2pm may well be the sweet spot for reaching parents who just need to get some work done and need something for their kids to do in the meantime. 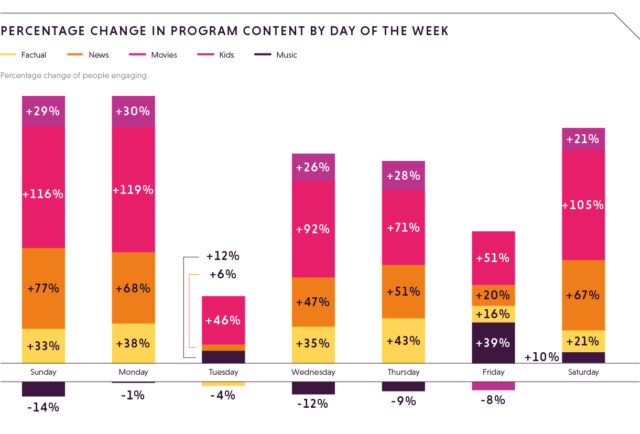 Generally, consumers have been more interested in entertainment content since the start of March, going online to look for content, search for more, discuss what they’re watching, and find recommendations. The net result is an increase in related inventory and biddable opportunities for advertisers. 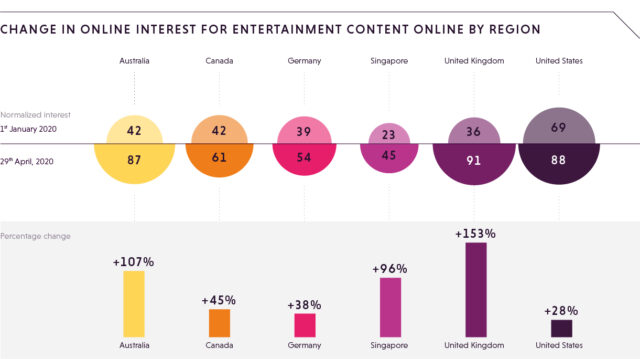 Entertainment Industry news has become a much bigger topic, as issues like the Trolls: World Tour launch debate take center stage and studios announce other delays and changes to their release schedules. Similarly, interest in movies and celebrity news has also increased. 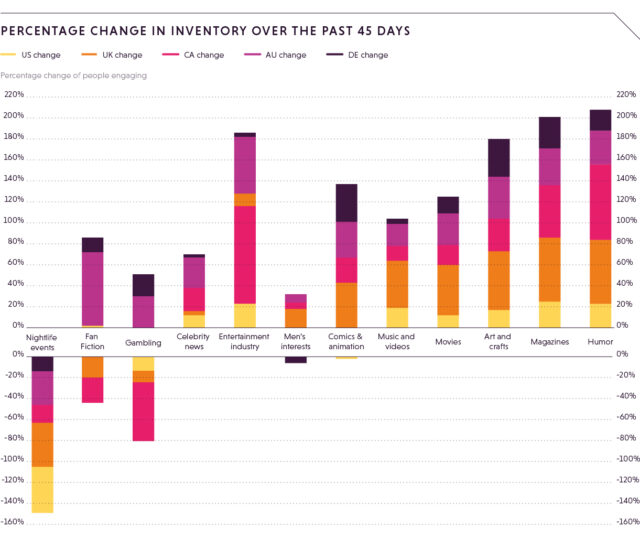 New movie and game releases, updates, and trailers for upcoming movies are still generating similar levels of excitement and engagement online, especially in the UK, where interest in VOD/PVOD releases is particularly high.

While spending for many categories is down as consumers cope with the economic realities of the pandemic, entertainment spending is one area that hasn’t seen much of an impact. Much like our gaming insights that looked at the run on consoles, consumers in most countries actually plan to spend more on entertainment products like home theater systems, sound systems, downloadable content and gaming consoles over the next few weeks. This has manifested itself as a gradual lift in interest and purchases over the last month, accelerated by the release of support checks in the US. 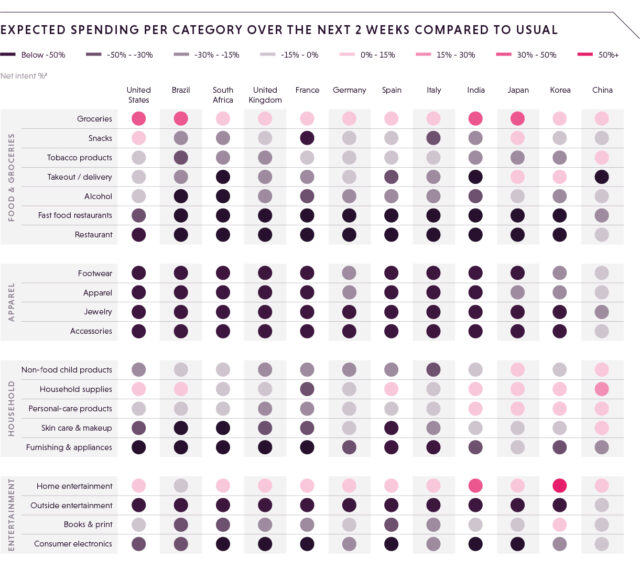 As with most categories impacted by the pandemic, the theme seems to be less that coronavirus is changing the way we do things and more that it is accelerating changes that were already in process. The slow decline of movie theaters may end up not being so slow as studios realize there’s more money to be made releasing movies directly to streaming and consumers realize they prefer the ability to watch in the comfort of their own homes to the hassle of going to a theater. Or it may just be that this is the case for specific types of releases, where theater visits are less convenient for parents who have children in tow.

Listen to the Insights Track podcast on Spotify or Soundcloud.